What’s a better way to kick off Homeownership Month than with a house blessing and dedication? This past Wednesday we were all in attendance for Shaneeka’s house blessing. She is also the 198th recipient of Warrick Dunn’s Homes for the Holidays! His charity along with other’s fully furnished her home. Every thing she could need was added so her family can start brand new and build new memories.

Shaneeka Grant had a vision for her family but knew that she would need a little assistance in order to make it a reality. As a kid growing up in Atlanta, Shaneeka recalls living in various apartments around the city, so as an adult, homeownership was always a goal. Back in 2017, Shaneeka was one step closer to becoming a homeowner, but the high down payment and life events quickly crushed her dreams. “At this point, I thought I could never get a house,” says Grant. Since then, Shaneeka has been living in a two-bedroom townhouse with her children, mother, sister, nieces, and nephews – a total of 10 people. “My current living situation is a confined space that makes it tense at times, because of everyone and all of our belongings not being able to be separate,” she describes. Shaneeka knew that living in such overcrowded conditions was not conducive to the growth of her children and she wanted more.

There is an old saying that good things come in threes, so when Shaneeka heard about Southern Crescent Habitat’s Homeownership program on three different occasions, she took it as a sign. First, she learned about it through students at her job as an accountant for a Georgia university. Then her sister told her about Habitat. Then finally, she listened to stories from two families that went through the program. In 2019, the Grant family’s journey towards homeownership began. “Looking forward to taking the first steps” into her new home, Shaneeka and her family are also enjoying the process along the way. She believes that the homeownership program has the power to positively impact families in more ways than just housing. Her children now “understand how providing a selfless act by volunteering can create growth and humble you as well.” She’s even excited about building wealth with lessons learned through the Dave Ramsey Financial Peace University and doing a little handy work around the house with tips she learned while doing sweat equity. Although Shaneeka’s original vision was blurred by circumstances, Southern Crescent Habitat for Humanity helped her paint a clear image for her family’s future. “I imagine us having more happiness, my children being able to expand their creativity without isolation due to space, and our family personally growing individually,” exclaims Grant. 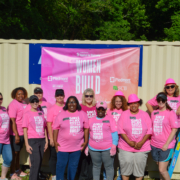